The Deep Abyss is a metaroom coded by Grendel Man and art drawn by Mea. The Deep Abyss is based on the dark ocean floors, with thermal vents heating the waters. It houses a variety of plants and other food sources. 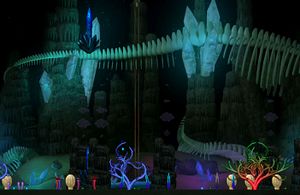 Central area of the Deep Abyss