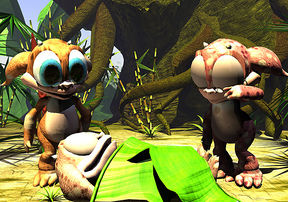 Most Norns will die eventually.

They say that death is just a part of life - or perhaps just another life stage.

All creatures will die over time. Some die of old age, some die from stillbirths.

Most creatures will most likely die if they lack glycogen or life/ageing chemicals. Norns can also die if they are in too much pain, succumb to fatal sickness, get killed by another creature or drown. Creatures that have an immortality mutation cannot die from old age, but may still be able to succumb to the other deaths stated.

It is not known whether norns have a concept of an afterlife, although evidently some hands do.

When Norns/Grendels die in the first game, their bodies will stay for quite some time before finally disappearing. Even though a Norn is dead, the game still retains its files, which can take up a substantial amount of hard drive space if they aren't deleted.

Death works slightly different in the sequel; Norns, Ettins and Grendels all now have a death pose, and after around a minute, Norn corpses will slowly begin to ascend to the sky, or "go to heaven".

If the corpse is disturbed during the process of ascending, such as being caught in a lift or on a vehicle, it can alter its flight path, and the body may circle Albia indefinitely. This can be fixed by using a spring or punch gun to launch the body into the sky. If the creature can still be selected, using the email function can also remove it from the world.

Unlike the original Creatures game, Creatures 2 will delete the files of any deceased Norns, freeing up hard drive space.

Death in C3/DS is similar to Creatures 2, but rather than ascending into the sky, Norns, along with Ettins, will disappear in a puff of smoke after the player views their body a few times. Grendels on the other hand will melt into a puddle of green slime and disappear. For wolfling runs, the Ghostcam was created, which allows bodies to stop piling up.

Another common fix for the death script is Peaceful Death, which causes the bodies of dead creatures to become invisible to other creatures, and for the hand to move them for easier autopsies.