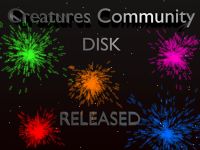 The Creatures Community Disk is Released

A Banner for the project created by Listeel

The current version of the disk includes the following content:

The CCD project generally releases new versions towards the end of half terms and holidays and is largely linked to release dates for the CCI. People wishing to develop for the disk should contact one of the project leaders. Version 2.1 may be a while coming due to lack of reasons for a patch.

The developers of the CCD project are: