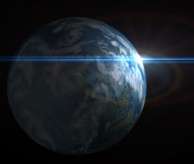 Creatures 3D is the Community's name for a never-made three-dimensional computer game in the Creatures series, not to be confused with the console game Project Loci.

It was planned to take place on Sphericus, the planet the Shee had left Albia in search of, and the game would have been set after Docking Station in the official storyline. Ian is quoted as saying, "The short answer to the question of 2D or 3D for a new Creatures game would be 3D, for sure", and planning documents released to the community in July 2022 bear this out. The engine was supposed to have been based on Origin.