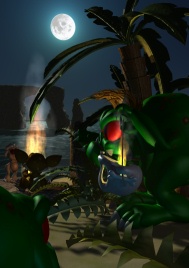 Unfortunately, as development progressed, problems emerged. It is possible that slink disagreed with the objectives of the rest of the C2 team (after the events described below, she left the CC with a limerick, the final line of which was "The AL from the norn has been torn"). Whatever the reasons, by the time Creatures 2 was released the relationship had degraded, and arguments broke out on alt.games.creatures when people voiced their dissatisfaction with the genome released as part of the game.

Slink continued to complain about not receiving payment, which was later sent.

Regardless of the legalities of who owned the initial genome (the 252 genome version), while many people enjoyed the game out of the box, others - particularly those who had played the original Creatures - were unsatisfied, claiming to be experiencing major defects, including a loss of female reproductive ability and the inability to teach norns to eat (inspiring fixes such as Eat you Stupid Norn) or to retain this knowledge, a condition later dubbed One Hour Stupidity Syndrome (OHSS).

Lis was credited on the official update, (the 254 version) and not slink, yet according to her there was some evidence to suggest that attempts had been made to retrofit slink's later work to the official update; in particular, the fact that release of the update had been delayed after slink announced her modifications, and that the updated genome produced a chemical that was not used by it, but which was used in slink's modifications.

Toby Simpson said that work had indeed been "inspired" by other people's work (including slink's) but that the specific changes that slink mentioned had been made in an aborted attempt to make the two modified genomes compatible with one another. slink contended that her work had been stolen and the theft inexpertly covered-up. The issue was complicated by the fact that both parties were working off slink's original genome, and was never really resolved - Cyberlife simply stopped posting about it after a month or so, as did slink a little while later. The 254 version is still available for download on the official site: information, Direct download.

According to Cyberlife, Lis contributed the myoglobin mechanism (which deals with muscle creation and destruction), and altered anaerobic respiration (energy creation) genes, but not the Upatrophin/Downatrophin modifications. Upatrophin and Downatrophin are responsible for making creatures use the 'uphill' and 'downhill' gaits - in the original 252 genome, they were swapped, leading to creatures trying to use the 'downhill' walk when walking uphill, leading to mobility problems.

According to GermanCreatures, there were numerous versions of the 'C256' genome available.

The '56 genome update', available at AmberCreatures, is an earlier edition of other '56' genomes. There are different times to begin each life stage, and it has a basic reward and punishment system.

The norn genomes included with The Albian Years are dated from October 1998 and later. They include improved reward systems from the Amnesia Norns.

According to Lis Morris, a Frog Norn genome is very similar to the Golden Desert Norn genome, but amphibious.

The norn genomes included with the Genetics Kit at the CDN are dated from November 1998 and later.

The Santa Norn included with the Creatures 2 Christmas Pack (December 1998) is a variety of the C256 genome which is infertile, but is said to be extra-jovial.

In the end the official update did not please everyone, especially those complaining about lack of sleep and OHSS; many breeders (and subsequent breed makers) later turned to the Canny Norns or LummoxJR's Nova Subterra, both of which featured significant changes in the design of the brain and associated biochemistry.