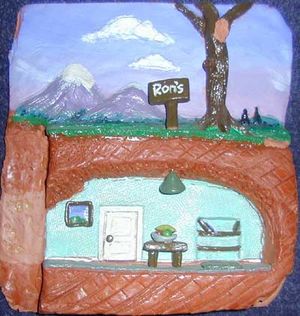 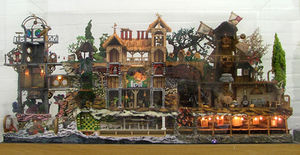 Believe it or not, most of the background imagery to Creatures was the result of actually creating a model with suitable additional decoration and digitally photographing it; subsequent touchups were made by Jason Riley and Colin Swinbourne to adjust the image to the technology of the time. The entire model fills three large display cases! Initially the idea of Steve Grand, it was drawn up by Mark Rafter and created by Complete Fabrications, a team of local model-makers who were used to making models for museums. Each case cost around £5,000 to make. The model did not include the desert island or mini-waterfall.

Did you know? The model had fairy lights (as shown) because there was originally intended to be a day and night in Creatures.

The large model, from the settlement to the kitchen, is currently owned by and displayed at the Centre for Computing History in Cambridge.