Creatures: Fallen Angel is a series of fanfics being written by Listeel, originally 'airing' on Albia 2000's forums. The stories are set many thousands of years after Creatures 3 and the Lone Shee's adventures, after the Shee Ark has been critically damaged by a stray meteorite. It lands on Sphericus below it and begins to grow...

It all started many countless years ago. The Shee Ark orbited the planet below innocently enough, until a wandering particle of space debris crossed paths with it. The lump of rock floated towards the ship, look harmless and even quite pretty from any of the Terrariums. Normally, this lump of rock would be dealt with by the ship's automatic defense system, but this was not the case.

Millennia of surviving on the biospheres contained within itself, the ship had wasted away, shutting all non-essential systems down and reassembling them into food producers. Before they had been cannibalized, the long range scanners had shown no asteroids in this new system.

The debris sped forwards, a lot faster now that perspective showed just how big it really was. The Ark panicked, its brain functions trying to power up the long dead engines used to cross the interstellar gulf. The rock flew inexorably closer, closer, closer...

...Until it finally hit. It punctured the outer shell of the engineering section like a stone through water. It destroyed the inner decks before emerging from the other side, leaving a clean hole in its wake. Atmosphere rushed out, vaporizing into outer space. Machinery and creatures were sucked out. Nothing not fixed down to the decking survived in the main corridor and bridge.

The remaining Norns, Ettins and Grendels cowered in their Terrariums, not understanding what was happening, while the Ark tried to stop itself being drawn down onto the planet, unable to use the interstellar drives to halt its descent.

It plummeted through the atmosphere, gravity breaking its delicate systems and organs, tailored to function in zero-gee. It started to heat, burning up in the atmosphere. The outer shell sustained further damage while the area penetrated by the space debris was decimated - burnt to a cinder.

The Ark tumbled down towards the Planet's surface, bracing itself for the impact that was sure to come.

The impact came. The ship, for the first time in its entire millennia-long life, blacked out; brain functions no longer able to run in the damaged brain tissue.

Decades later, an auto-instinct function awoke, emerging from a cortex heavily buried in the ships flesh. It developed into a managing consciousness and began reviewing the damage.

Many shell-bulkheads had been torn asunder in the crash, revealing soft ship-flesh beneath. This had rotted, seriously limiting the new consciousness's ability to regenerate. The stem cells of many systems had been either rotted of burnt to a crisp.

There was no possibility of taking off again to orbit and wait for the Shee's return. What remaining exterior sensors it had had not detected the Shee on the surface yet, so logically they must have moved to the other side of the planet.

But there was one anomaly, the atmosphere around and inside it were poisonous, deadly chemicals lacing it. The Shee must have analyzed the planet wrong, or something had happened to make it this way. The Ark decided that if any Shee had survived off or on the planet, they would like a breathable atmosphere to come to.

So the Ark set to work expanding its only organ able to generate fresh atmosphere, the terrariums. They grew upwards and out, bursting with fresh plant life seeded by the ship's seed spreaders. The engineering level was repaired, new organs grown to process the atmosphere. The massive habitation levels used by the Shee were bio-formed into chimneys that would suck in and expel vast quantities of air.

Over centuries the Ark never stopped working like this. After many years it eventually deemed whatever resources it contained within itself depleted, and started gorging itself on nearby minerals. It deployed great absorber roots to suck the land dry of water around it, so it could control the humidity of the atmosphere.

Over 500 years since the crash and the ship had reached a size unimagined by its creators, the ark was now a permanent installation. It could have contained its original form in one of its now extremely bloated bio-domes. It still had a similar shape as its old self, but was gigantic.

The now much superior thought process decided that introducing life in the form of the Shee's 'Creatures' would prove advantageous, and released ten of each form's eggs into the domes. Ettins in the Desert, Grendels in the Jungle, and Norns in the forest.

The aqua room it left to bio-form into another forest room, and didn't place any life-forms other than the plants in it. Slowly the forest reclaimed the beaches and the water pools shrunk, leaving only a narrow strip of sand to give evidence to its earlier form.

Hundreds of years passed. The Creatures inside it lived in harmony, exploring the expanded domes, finding evidence of the old Norns, Ettins and Grendels.

The Norns and Ettins gradually developed higher and higher intelligence due to evolution and the Ship's own intervention in expanding their problem solving and memory functions. The created an expanded vocabulary, mimicking the complexity and emotion of Shee.

The Creatures began building, harnessing the ability to create and manage fire, electricity and bioenergy. Ettins proved adept engineers and scientists, while norns could build and farm the biodomes.

The Grendels used their new intelligence to enhance their hunter instincts. Developing complicated strategies and lighting fast raids against the other two species.

Two millennia after the crash the ark had developed into a massive form, filling the plateau it had crashed onto so long ago. Still, only a minute fraction of the Planet's deadly atmosphere had been converted into breathable air. Life flourished and bloomed inside the domes, while a few feet away through the protective dome skin sand and dust swept away desiccated biological matter.

The ex-starship decided it needed to expand its operations, and prepared a Life Seed. The massive kernel was easily the size of one of the old ark’s bio-domes, containing all that would be needed to establish a second installation: brain matter, atmosphere generators, seed banks, energy stores and most importantly, fertilized eggs from each species. The ark attached many motor flesh appendages (Used to repair the outside of the craft during flight) to the side of the Kernel. The life seed slowly and majestically walked out from the instillation’s front air-lock cavern, pondering its way towards the distant horizon. A promise of new life...

Creatures Fallen Angel is a pet fantasy of mine, and is part of a much larger imagining of what happened, is happening and will happen in a world based on the Creatures games. It is not intended to mesh with the Canon storyline, it is more of an alternate universe.

FA concerns the Ark's fate, and its transformation into the Fallen Angel, and ultimately into the Halo as it encircles Sphericus.

FA and the rest of the expanded universe has been a starting point for several failed or defunct projects and stories of mine, many of which I hope to take up again and complete, but for now it will remain in note form till I can get the drive to do something with it.

PS All religious names used ie. Angel, Halo are purely fanciful, and not meant to be related to actual Christian/Other teachings 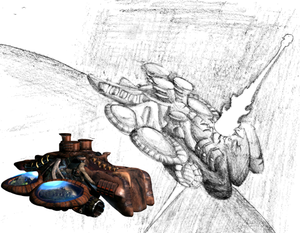 The near fatal impact...