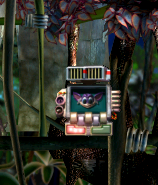 The Creature detector is a gadget included in the Creatures 3 world. The red button on the player's left turns the detector on and the right button is used to cycle between three species of creature: norn, ettin, and grendel. When it is connected to another gadget, it sends a signal to that gadget which detects how close or far away a creature fitting that species is (255 being right on top, and a low amount being far away), and also in which direction the creature is from the gadget (negative is to the left of the gadget, positive is to the right).

For an example of how the creature detector can be used with other connectable agents, see The improved Grendel-killing machine!

It can be used in a DS-standalone world by downloading the DS Connective Agent Pack.