Creatures Nametags is an in-game tool for Creatures 3 and Docking Station by Amaikokonut. It adds text under a creature showing its name, the original breeder, and a player-defined secondary tag. They use the Magic Words Core library, adding the commands "set tag [text]" and "reset tag" for editing the secondary tag. Tags are color-coded by gender: female creatures have pink text while male creatures have blue. They were updated for the CCSF 2017 to make the plane lower, remove debug info, and make tags move around each other. Version 1.3 was released for the CCSF 2021, in which the Creatures Nametags became a little more resource-friendly, Nornbinary friendly, faster to generate, and don't error as much. 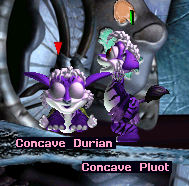 The nametags in use in-game, using Advanced Protective Tub naming.