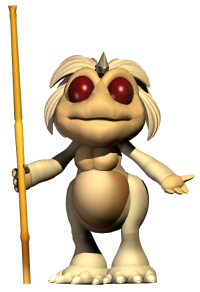 An C2 ettin - an example of a Creature.

A Creature is an animal with a brain in the artificial life engine of the Creatures series of games, as opposed to critters, which have scripted activity (they are either a COB or an agent).

All Creatures have haploid Digital DNA and a working biochemistry. They also possess drives which guide their behavior depending on what they need, servng as the human equivalent of 'feelings', such as hunger or anger. They can reproduce, resulting in the creation of children that contain genetic material from both parents. A major part of the Creatures series gameplay for many players consists of breeding creatures for desirable traits.

The species of Creatures are Norns, Ettins (officially introduced in Creatures 2) and Grendels. For each of these species, there are a number of breeds, both third-party and official, which have different sprites and/or different genomes.

Another lesser-known category of Creatures is the Geats, which is a catch-all for (generally third-party) breeds that do not fit into the standard categories. Examples of such unusual Creature species include GIL for C2 and Gaia for C3. In Creatures 1, the Geat category was called Shee instead, as in the C1 Shee.