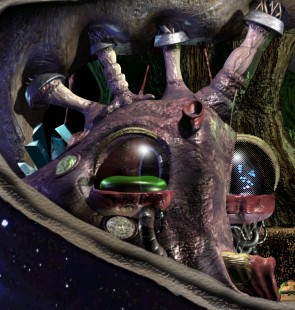 The Commedia is a lifeform found in the Docking Station, in the lower level of the Norn Meso. The Commedia was created to entertain the Shee and their creatures by taking the shape of any object near it. The Commedia is normally contained within the Commedia Pod, and can be released by a creature or the Hand. While the Commedia is in the Pod, you can watch it continuously changing shapes; two favourite shapes seem to be a C3 rabbit and a C3 ball. It normally appears as a thick transparent green disk. You can tell a real item from its Commedia mimic by the green tint.