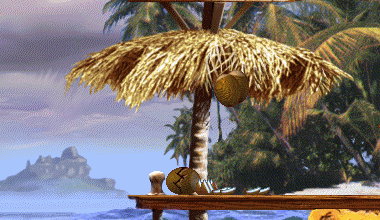 The Coconuts are a COB for Creatures 1, introduced with the Object Pack 2 in October 1997. Creatures must push the coconuts to crack them into fragments small enough to eat - which is a painful process!

Introduce a new food source to the Desert Island; it's not recommended as part of a staple diet but is more than adequate for a survival snack.

Pressing INJECT will seed 4 coconuts onto the Island's palm trees.

Creatures call the whole coconuts 'toy', and the pieces 'food'.

When eaten, the coconut pieces each give:

A Safe Coconut variation has been made by Spotling, which makes the work of cracking coconuts very entertaining rather than painful. Steve Dismukes made a Coconut Crab COB which lives on the island and eats coconut flesh. An Updated Coconuts variation has been made by Alex, this makes cracking a coconut entertaining rather than painful but also fixes a bug that prevents creatures from eating the coconut pieces.

The Masham Berry of Creatures 2 is often mistaken for a coconut. More Coconuts is a C2 COB by Mr NStuff.

They were converted for the Aquatic Terrarium by Lis Morris.