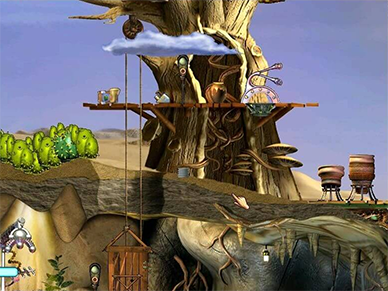 Example of two cliff edges - the tree platform above the incubator

Cliff edge is a classifier used in Creatures 2 that refers to the edges of cliffs and platforms. Creatures usually feel fear from them, but unfortunately, due to them panicking and running in the wrong direction, falls are often a common occurance. GimmeCat included a Cliff edge remover in her Better Albia fixes to remove the cliff edge objects from the world and stop creatures from becoming frightened when they are in view, and Helen's Bridge and Barrier Pack adds several invisible barriers to the world to stop creatures from falling. The player may also wish to use the electric gate included with the C2 Object Pack 1 as a way of forming barriers to prevent falls.

Creatures have a unique set of "teeter" poses that will be performed if they reach the very edge of the cliff edge. These typically consist of the creature moving its arms back and forth in a rowing motion whilst moving back and forth (an example can be viewed here).

Cliff edges don't exist in C1 or C3/DS; the former uses invisible walls to stop creatures falling, and the latter removes cliff edges entirely, so creatures will no longer feel fear when they are near the edge of a platform.