Cheese is a staple of any Creature's diet, and can be found in all versions of the Creatures series. Resembling a wedge of our earthly Swiss cheese, Albian cheese is one of the most nutritional natural food sources available in the series. Cheese is a non-replenishable food source.

The wedges of cheese available in Creatures are the most nutritious natural sources of food in the game.

Several wedges are scattered throughout the world when the game is first started, and 10 more are available in the Health Kit. However, once these supplies are depleted, the only way to replenish them is to use an Emergency Kit supplied with a later version of Creatures, or to import a cheese dispenser COB downloaded from one of several community websites.

Pictured at right is Spotling's 'Many Cheese' COB, which supplies a string of nutritious cheese across the lower levels of Creatures' Albia. Also pictured is a Forest Norn cross-breed.

An updated version of the Creatures 1 cheese was released in February 2016 at Discover Albia, which can be downloaded here. It includes the following improvements and new features:

In addition, the update includes an alteration of the Health Kit's stocks to incorporate the updated cheese and to increase the herbs produced.

Cheese is made available in Creatures 2 via dispensers placed throughout Albia. Its nutritional value is somewhat less than that of the cheese provided in the original Creatures; however, it remains a reliable source of nutrition.

Several cheese variant COBs can be found in the C2 Food list, and Freya made a Cheese Dispensor. Dingus made a Cheese Machine Upgrade which upgrades the official C2 cheese machines to vend Slink's extra-nutritious Cream Cheese instead.

In Creatures 3 and Docking Station[edit] 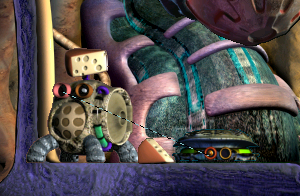 The Cheese Machine in the Norn Terrarium connected to a contact sensor. A wedge of cheese can be seen between the two gadgets.

Cheese found in Creatures 3/Docking Station is dispensed from Cheese Machines found throughout the C3 Shee Ark, and has a lower nutritional value than the cheese from the original Creatures.

Due to the Cheese Machine's reliance on bioenergy, and the lack of cheese in Docking Station, several cheese and cheese vendor agents have been made for these games, including the Improved Infinite Cheese Machine, Classic Cheese Vendor, TwilightCat and Trollop's Cheese Plant, and the Cheese Launcher.

In Creatures Village, the Gothic Cheese Machine in the dungeon feeds the rats with cheese, which norns can also eat.