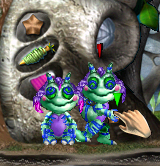 The Chameleon Ettin breed was created by Norngirl. They have their own sprites, and a slightly different genome. It was her first Ettin race for C3. There are two versions, one without color changes and one with the true color changing. Both genomes are based on the CFE genome (originally made by Vampess).

Chameleon Ettins are cute, mint-green with dark blue stripes and have purple hair and bellies. They have chameleon-like eyes, tongue, curled tail, horns and hands, but only two clawed feet. Females have neon-pink tips on her hair, which is shaped as a frill. They tend to stick out their tongue often. When facing front, they may as well stick out the tongue as they move their eyes. They have blue swirl pattern on their eyelids, a old defense trait that is no longer used, but that scared predators away by making their eyes look like swirl eyes when closed.

The Chameleon Ettins are born in their natural colors. That is because they have not got the hang of how to change colors yet. But as they age, they begin to change color for each lifestage. They enjoy snacking on bugs, following each other or even Norns around when lonely. They like warm places and enjoy playing with toys rather than pick up any gadgets.

Known genome issue: They where meant to attack back grendels if hit when youth, but it seem to not work, instead they can be acting quite aggressive towards creatures, so beware!

It can be downloaded at Norngirl's Temporary Storage Place