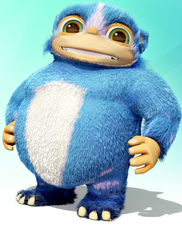 The Cavern Norn is a Norn breed that comes with Creatures Online. It lives in the Cavern area of Sphericus and has a stocky build with small ears. A single Cavern Norn was first seen in the early 2011 demo of Creatures Online after being rescued from a group of angry chameleons by the player.