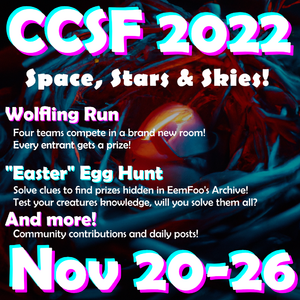 The CCSF 2022 is the 19th annual Creatures Community Spirit Festival. It was planned to run from November 20 to November 26, but due to technical difficulties with the planned wolfling run and extra submissions, it was extended to November 29.

There are 19 slots total in the wolfling run. These teams are broken into four teams of five and will be played out on a new metaroom!

It was asked that submissions be sent to EemFoo on Discord before August 15th.

Some releases can only be found in an easter egg hunt through Eem Foo's Archive by following hints on the daily posts.