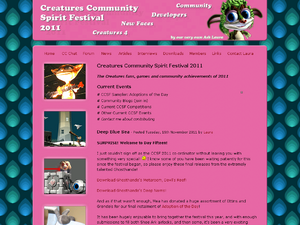 The Creatures Community Spirit Festival 2011 ran for two weeks, from Tuesday November 1st to the 14th, with a surprise additional day on November 15th. The coordinator was Laura, with AquaShee assisting.

The theme was 'New Faces: new users, creators starting small, and perhaps a new game to boot', i.e. The Creatures fans and games of 2011, established by the results of a theme survey. Each Creatures fan who contributed at least one item to the festival got a featured mention.

Alternate proposals for themes included "Technology and Inventions: highlighting Ettins, Shee, gadgetry and machines.", "Legacy, Past and Future: highlighting time capsules, the Creatures legacy, old charm and what's still to come.", "Frontiers: jungles, deserts, and other frontiers around the world.", "Season's Greetings: any holiday from any corner of the globe.", "Kaleidoscope: a whirlwind of fantasy, fairytale, carnival and fairground fun.", "A Beach Theme.", "Realism.", and "No Theme."

There were three competions this year, with the Platinum Cupid's Halo, an exclusive prize created by Ghosthande, awarded to each winner!

The sheer volume of submissions this year was simply overwhelming. With over forty releases, enough to fill both Shee Ark airlocks and then some, Laura believes that the CCSF 2011 has set a new record for festivals to come!