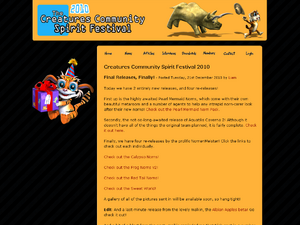 The Creatures Community Spirit Festival 2010 was coordinated by the very talented Liam, with the theme of 'Creatures Future, Natural Selection' and was held from November 1st through November 14th. However, due to some family issues/concerns, Liam needed to delay the last day of the festival so he could focus his attention during that important time. On December 21st the festival finally ended with quite the bang! We thank Liam for his tremendous effort and the many hours of time spent making this CCSF a great one! Also on behalf of the Community, a very heartfelt 'thank you' goes out to Amaikokonut, who organized the planning of CCSF 2010. Everything was decided via polling or voting through a third party website, which he organized.

Truly a great year! Be sure to check out the many releases, as well as the astounding number of articles available!