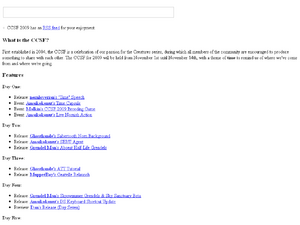 The Creatures Community Spirit Festival 2009 was held over a period of two weeks in November, as determined by popular vote in a week-long poll held across Creaturetopia, Creatures Caves and Albia 2000. A majority of voters in a second series of polls held across these same three forums determined that the CCSF would begin on November 1st, celebrating the 10th anniversary of Creatures 3, and end on November 14th.

A third series of polls were held across Creaturetopia, Creatures Caves, Albia 2000 and Kingdom of Aithalis to determine which of the three most popular theme ideas suggested so far (Time, Preservation or The Future) would be the theme for 2009. The polls closed on September the 8th with Time as the clear favourite.

The website used for CCSF 2009 was designed by Starscream, and submissions were collected up and scheduled for release by 3kul.