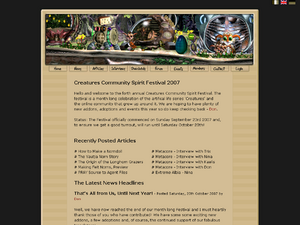 The theme for 2007 was Community, in which the Festival was 'community run' and dependent on contributions and events held by individuals instead of a usual pair of Coordinators. There was confusion in the community on what this meant, so events were disorganised. Technical problems with the website also added to the confusion.

Unfortunately, archives for the official site are very incomplete, so there is no complete list of releases.