The Bulbous Grendels lived in the old volcano and stood virtually no chance of survival; to the left there was an airlock for the submarine, which the grendels could walk into and drown themselves, and to the right there was a long drop into the volcano, which was highly radioactive and slowly destroyed their bone marrow. If they got out of that, there was a 'swamp' that had many poisonous Deathcap Mushrooms.

When breeding norns in Creatures 2, the player rarely encounters grendels, as they tend to stay in the swamp and volcano. Contrary to their description, Bulbous Grendels do get reward for hitting another creature, but have no instinct to do so in the first place. They are also no more likely to carry disease than the player's norns are.

The original release of Creatures 2 had no sprites for female bulbous grendels (or ettins), but these were later included with Life Kit 1. Females are almost identical to males, but have yellow spines on their back, longer hair, and no visible teeth. 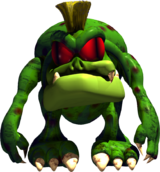 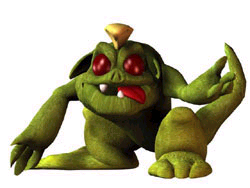 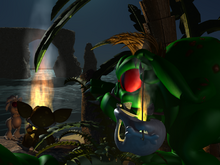