The left half of the Ark's main corridor, the Bridge is the command center of Creatures 3 - from it you can view a map of the Ark (and the locations of creatures within!) and the monitors for the four cameras spread through the terrariums of the Ark. If a camera has been destroyed, clicking the flashing red/green button by that camera view screen will create a new one. The Bridge also contains a Knowledge Stone and emergency rations in the form of a Cheese Machine. 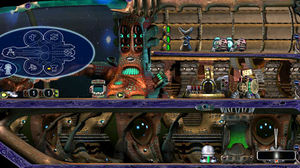 Screenshot of the Bridge, featuring the Ark map at left and medical bay at bottom.

Below the camera screens in the Bridge, there is the Medibay. From the pod there you can monitor a creature's health, administer medicines and other chemicals, and cleanse bacteria.

Even further below is the larger of the two Airlocks. Beware! If an unsuspecting creature wanders in and happens to push the activation button, they'll be launched into cold space in a matter of seconds. However, the airlock does provide a convenient means to destroy agents that don't fit in the Recycler. Or the occasional grendel.

If you're playing Docking Station docked with Creatures 3, the umbilical back to the Capillata will be just to the left of the airlock.