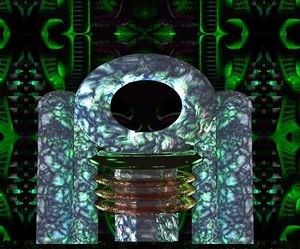 The Borg Norns are a breed based on the Borg from Star Trek - a species that assimilates other creatures into its own species. They use breed slot Norn T, with sprites based on the Chichi Norns.

The BioLab team that made the Borg Norns consists of:

The breed also came with a set of three metarooms, one based on the Hydroponics Bay, that was never completed and have some errors. Creatures may also not be assimilated as intended.

Both the breed and the beta of its accompanying rooms can be downloaded at Eem Foo's Archive here. Note that it is not compiled into an agent, and the included new favorite places script will mess up the world's signposts.