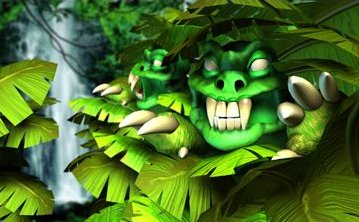 Created by Lis Morris for Creatures 2, this Grendel:

Another name for the Boney Grendel was the Grenzel. The original pair of Boney Grendels available were named Grendenile (F) and Figgle (M).

It has been converted for C1 by Slaiterbait.

A C3/DS version of the Boney Grendels, made by Angelnorn, is available from Scribbles, using a standard grendel genome, however it has .ATT problems.

Another edition, made by Arnout for the Banshee Ark, was released during the CCSF 2018, with sprites for all facial expressions and all life stages. Like the originals, they are ferocious, but cowardly. Arnout's Boney Grendels use the same breed slot as Angelnorn's earlier conversion, Grendel Slot C. They were released with several alternative genomes, including a 2017 genome and a True Coldblood genome.