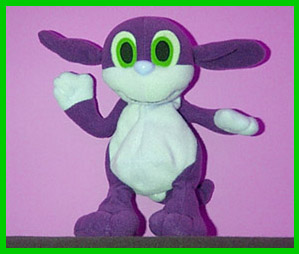 Blueberry was a very special Purple Mountain Norn, one of the original norndolls. She was kidnapped from the Cyberlife booth at the E3 games conference in late May 1998 (see history). An offer of £1000 was made for the safe return, or £500 for information of his whereabouts (Cyberlife not having realised that Blueberry was, in fact, female), but despite various ransom notes and other documentation of dubious provenance from the Creatures Community, the reward remained unclaimed for almost a year until the kidnapper - a freelance games journalist named Richard Moscatello - came forward.

Ransom note from the 'Phat Clan'

The ransom notes in question came from a group identifying themselves as the 'Phat Clan'. Among other things, they demanded a version of Creatures 2 for the Mac; Toby Simpson had stated in the Februrary 1998 newsletter that no such version would be released. Some suspected this was a premise to announce the surprise release of Creatures 2 for this platform, but this turned out not to be the case - although they did initially relent and promise a Q1 1999 release for the Mac, it was cancelled.