Bacteria are invisible organisms that cause disease in the Creatures series.

In Creatures 1 and Creatures 2, the engine choose a creature at random to infect with bacteria. Each bacteria starts off by infecting infect a norn or grendel with one antigen. Later, after the bacteria themselves have evolved, they randomly infect a norn or grendel with an unknown toxin, which may include more than one antigen, one or more histamines, and other toxins. Players that wish to avoid this evolution can export their norns and reset their world using the Emergency Kit. 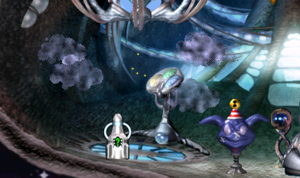 In Creatures 3, bacteria are actual agents that float around the world, with a minimum and maximum amount of bacteria allowed specified by the game. They can attach to either creatures, or agents in the world. When they infect a creature, they will start injecting it with one antigen and one basic toxin at regular intervals, but through a process of mutation, later in the game, bacteria can have an additional basic toxin. When bacteria are on creatures or in the Grendel Jungle, they may randomly reproduce if the maximum bacteria limit has not been reached. They also have a lifespan. You cannot see the bacteria without aid. The Hoverdoc can provide this in the form of a bacteria-detection spray, or you can use VisiBug by Hausmouse. The HoverDoc and Containment Chamber can also provide bacteria-killing spray. In DS, you can use the Bacteria Button by Moe to see the bacteria. To remove bacteria using the CAOS Command Line, see C3/DS_CAOS_Codes#Getting_rid_of_things. The bacteria nerf patch or Bacteria Revamp-Dish changes several aspects of bacteria in the games.

In Docking Station, the vast majority of bacteria appears in the Workshop.

In Creatures Village, the haunted forest and dungeon are the most bacteria-laden part of the world, and the house is bacteria-free.