BAMZOOKi is a television show series linked with a 3D game created by Gameware. Launched in March 2004, the third series is currently airing on The CBBC Channel. 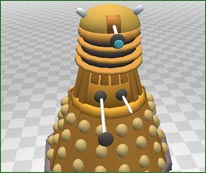 ZOOKs come in all shapes and sizes . . .

The lifeforms in BAMZOOKi are called ZOOKs. Players can use the BAMZOOKi Tool Kit to create new ZOOKs, which have varying capabilities depending on their forms. Many teams have sprung up around the UK dedicated to creating collections of ZOOKs and competing against one another.

Francis Irving was heavily involved in BAMZOOKi's initial development, sometime in 2001-2002. The main implementation was by David Bhowmik and Guy Tristram. Dylan Banarse is now project manager and lead programmer.

Paul Tyler came up with the idea for the show in 1999, and had contacted what was then Creature Labs about it by 2000. He was producer and director for the show until the end of its run in March 2006, at which point he joined Gameware.

BAMZOOKi uses the Lua scripting language, unlike the Creatures series, which use CAOS. It also makes use of SciTE, MathEngine, and RenderWare.