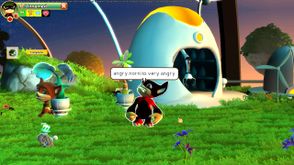 Angry Nornito was a norn from the Creatures Online Paris Games Week demo. In the demo, Angry Nornito is a wild norn who invades the Hatchery from the Treehouse. Master Shee teaches the user how to use the Science Kit to calm him down, making the scenario a tutorial of sorts. Once Angry Nornito calms down, he leaves the Hatchery through the portal. It is unknown if he would have made another in-game appearance.

Due to his popularity, his spirit was planned to be put into a special item for Creatures Online - a chili.