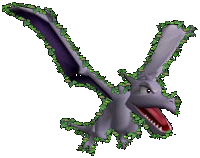 The Albian Gods are a set of five COBs for Creatures 2 that are based on Pokémon. They are large "nature" objects that have a wide range of effects when activated:

The Albian Gods were created by Ira and previously hosted on Iggdrasil.

The original versions of all the Albian Gods except Golym had very quiet sound files. In version 1.1, uploaded to Creatures Caves, all of their sounds have been adjusted to be more in line with the volume of the rest of the Creatures 2 game sounds and edited so they do not cut in or out suddenly.