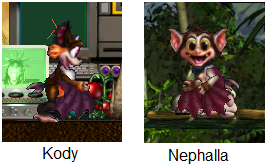 The Starter baby pair of the Albian Bats

The Albian Bat Norn is a Norn breed for Creatures 2 created by Norngirl. Razgriz helped in making the genome,with Norngirl adding in the darkness make them awake part. You can get them at Norngirl's temporary storage place. The Albian Bat Norn's breed slot is Norn slot U. Their genome is based on the Canny genome.

The males have red eyes, long snouts, brown, orange, and black fur, white chest fur, and big, dark purple wings and tails. As the males get older, they get paler in color. Their eyes change from red to light pink. It's notable that their wings and tails have holes in them when they get older.

The females have yellow eyes, pearl white and black fur, brown-black hair, black chest fur, bare bellies, and dark red-purple tinted wings with the same color for the tail. As the females get older, their eyes go from lemon yellow to light yellow. Their fur mostly turns grey and white in color and female's black chest becomes pure white. Their wings and tails also have holes in them when they get older.

The males feed only on fruits while the females prey on Creatures by hitting or pushing them. The Albian Bat Norn doesn't get much crowdedness and they enjoy following each other around. When they mate, the males get tiredness and the females get energy so they can lay their egg. When they gets cold, they go to sleep. Their life-span is half as long as the Golden Desert Norn's life-span. They enjoy dark places, such as the hatchery or the swamp, and regain energy when put in the darkness. In dark places, it's impossible for them to fall asleep. However, bright places have no special effects on them.