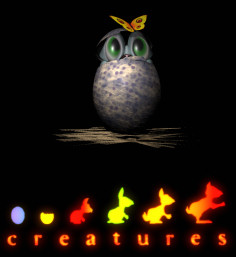 I never intended Creatures to be an adventure game or have a fixed plot at all - the idea was that you would create your own stories . . . But everyone had interpreted my mythography stuff far too literally, and people were trying to make Creatures into some kind of Norse adventure game . . .

It is also interesting to note the features described as possible for the rewrite, many of which would not be fully realized until Creatures 3 or Docking Station: Decided to add 5 months to schedule; more gratuitous graphics; more facial expressions; new norns (monkeylike); everybody’s norn is unique; complete rethink and rewrite of code; add hooks for extensions; allow norns to travel from one person’s system to another, via disc or modem; buy new norns; possible speech in/out.

"if the management doesn’t improve and the business made more commercial it could be back in trouble very soon"
In other news, Creatures Labs released the Magma Norns (previously only available in Creatures Internet Edition)